These homes on the market are over 100 years old

Whatever the reason you’re here, whether you’re honest-to-goodness house hunting, you’re searching for new images to tack to your old home vision board, or you just need something to gawk at to pass the time cooped up indoors, enjoy a virtual tour of these one-of-a-kind Texas properties on the market.

The listing: “A rare offering in The Courtlandt Place Historic District. Founded in 1906, Courtlandt Place has emerged as the crown jewel in Montrose’s renaissance. Situated behind the subdivision entry gates, #4 Courtlandt Place is a Tudor-Revival style home designed by Sanguinett & Staats and built in 1910. The present owners conducted a substantial renovation to update the home while retaining its character and architectural elements. An inviting front porch spans the front façade. Inside, the double parlor

ClearTitle Agency of Arizona has set up a drive-up tent for filing paperwork during the COVID-19 pandemic.

Move-in-ready homes sell faster and for a better price than fixer-uppers, but making repairs and improvements can mean spending your savings, not to mention the hassle of finding dependable tradespeople to do the work.

Jon Cressman discovered an easier way when he sold his house at 311 Mckennell Drive in Nashville. He updated the exterior, the master bedroom, the kitchen and two bathrooms without having to spend a dime out-of-pocket or worry about finding vendors.

Cressman’s real estate company, The Erin Krueger Team at Compass, provided a zero-interest loan that he repaid at closing. The company also offered its list of trusted workers. It’s part of a new national service called

© Provided by Daily Mail
Sold: A 4,999 sq. ft. home that once belonged to The Wizard of Oz star Judy Garland in the Hollywood Hills has sold for $4.675 million

A 4,999 sq. ft. home that once belonged to The Wizard of Oz star Judy Garland in the Hollywood Hills has sold for $4.675 million.

According to the Los Angeles Times, the three-story Los Angeles mansion remained on the market about six months, after it was initially put up for sale this past February with an asking price of $6.129 million.

The sellers accepted about $1.5 million for the home, which has five bedrooms and seven-and-a-half bathrooms, according to the outlet.

The home, which sits atop the Sunset Strip, was initially designed by famed architect John Woolf and built in 1941. It offers magnificent views of Los Angeles and the city’s skyline.

Among the amenities featured in the home

The Best Colour To Paint Front Door Based On Star Sign

Find your unique interior style with a little help from your zodiac sign. From colours to plants and your lucky house number, the team at Barratt Homes have partnered with celebrity astrologist, Sally Kirkman, to help you style your home entrance based on the traits of your star sign. Just for fun!

Fancy looking to the stars for inspiration? Whether the below ideas ring true for you or not, when it comes to your front door, kerb appeal is always key, and above all, put your own stamp on it to create somewhere you’re proud to live.

Aries are naturally energetic, with a passion for bold, fuss-free designs. If this is your star sign, refresh your front door with a lick of letterbox-red paint — it’s a surefire way to make a statement. Opt for materials such as steal 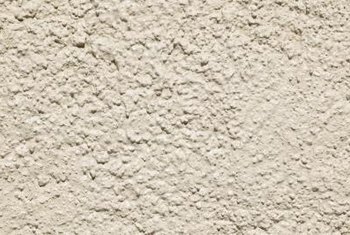 While a plain concrete brick wall is sturdy and serviceable, it’s not exactly the most attractive addition to your home and may call for some customization. Stucco is a durable surface treatment that covers concrete block or bricks with little preparation. There are several finishing techniques that provide attractive textures in plain stucco, but it can still need some enhancement when you want a look that makes a bolder statement. One of these methods is to decorate the stucco with rocks.

Inspect the wall. It must be clean and in good condition. Make any necessary repairs before you start your work..

Apply thin strips of wood, 3/8 inch thick, to the top and bottom of your concrete brick wall with masonry nails. You might need more if your wall is very tall; these strips enable you to smooth out your work to a uniform thickness later.

HANCOCK – A Mud Creek Road home was heavily damaged Friday night after a fire that started in the garage spread into the adjacent home.

The fire was reported at 6:16 p.m. Friday after a passerby spotted smoke and flames coming from the garage at 182 Mud Creek Road, according to Hancock Fire Department Chief Chris Holmes. No one was home at the time and there were no pets.

Holmes said the fire spread from the garage to the exterior of the home and up into the ceiling.

“It burned the roof off, basically,” he said. There was extensive damage to the third floor and less but still significant damage to the first and second floors. The garage was leveled.

The home is owned by David Leeman.

A challenge in fighting the fire initially was getting enough water to the home, which is set a distance from the main road.

The group vandalized his home, by scrawling graffiti on the steps to his house, and an exterior wall. 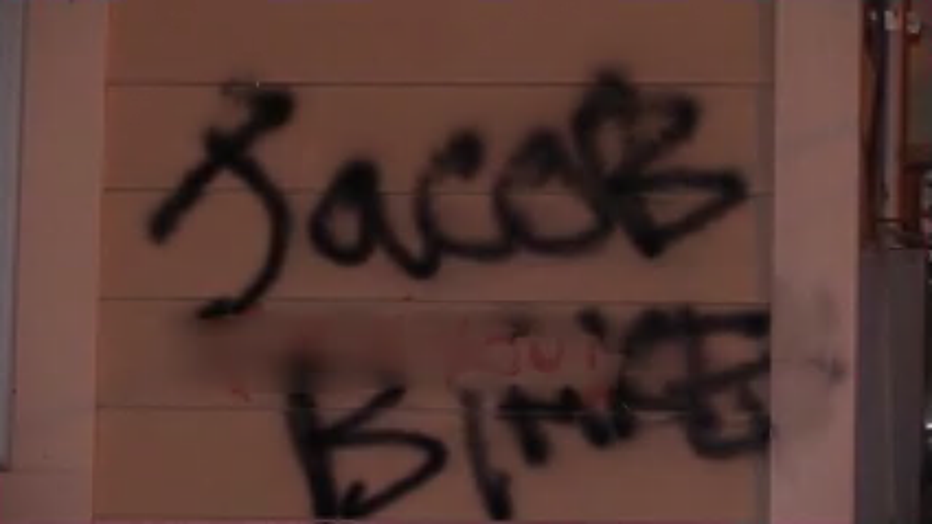 Liccardo was seeing a family member, and was not home at the time of the vandalism. 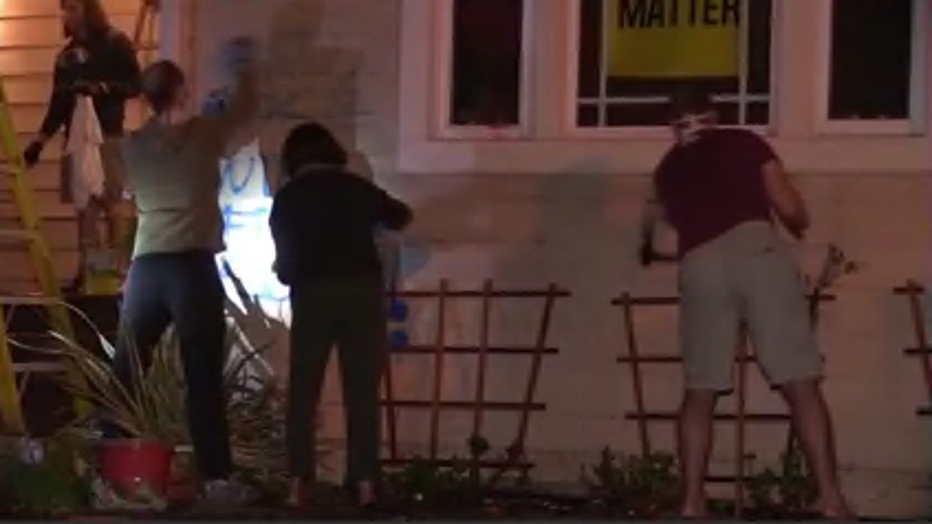 He later received a call alerting him about the incident.

Liccardo said he was deeply touched by the support of about two dozen neighbors, who on their own, went to his home, and scrubbed away the graffiti. 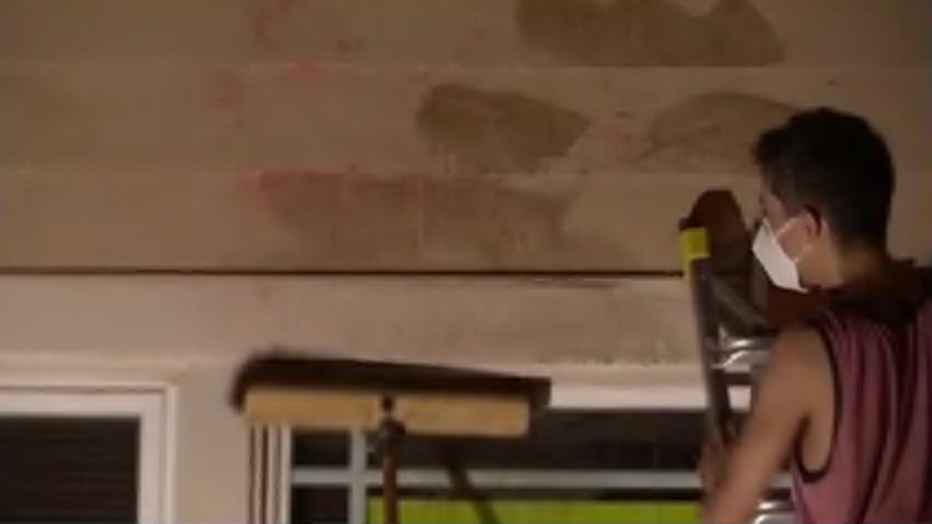 “It’s very heartening to see people take time out on a late Friday night, to help someone out.” said Liccardo. “I’m very grateful for

Video showed several dozen people walking up the driveway to Moore’s home and attaching signs to the garage and front entryway that read “Defund LAPD Now” and “Fire Chief Moore.”

People could also be seen writing messages on the sidewalk and walkway.

The home is in a gated community.

Moore was later seen on video using a power sprayer to wash off the exterior of his home and another person wiping down walls.

There was no word of any arrests.

As temperatures cool and the sun sticks around for less and less time, people are going to need additional lighting in their outdoor spaces. This week on Deals We Love we’re highlighting two great pieces of technology designed to provide unparalleled illumination to those darkened corners of any homeowner’s yard. Whether it’s needed for security, family entertainment or simply to pick up where the street lights leave off, you won’t be disappointed with either of these options.

The folks from Ring have upped their game again with this combo floodlight/security camera/speaker/alarm. It’s a backyard security workhorse that allows users to see, hear and speak to visitors from their phones, tablets or PCs. Homeowners can toggle between infrared night vision or Live View as they enjoy the 1080HD video that Ring has made customary on all its devices.

On Thursday, left-wing criminals vandalized the home of LAPD Chief Michael Moore. It’s not clear how the left-wing thugs entered the gated community, but, once inside, the mob trashed the exterior of the chief’s home and broke at least one lantern.

“We are at Chief Moore’s house,” the loons chanted. “He is the chief of LAPD. The most brutal police force in the nation.”

SURPRISE ACTION: Protesters with the activist organization Black Future Project made flyers for a protest at DA Jackie Lacey’s house, but in a switch, the group is now at LAPD Chief Michael Moore’s house to stage a Die-In.

According to Samuel Braslow of the Beverly Hills Courier, the mob had originally set their sights on the home of LA County District Attorney Jackie Lacey before changing their target to Chief Moore’s home. The protesters